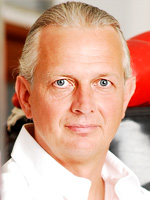 His father was a boxing instructor. His brothers were boxers and Judokas. At the age of 13 he started practicing Karate and at the age of 17 he added Kick-Boxing and Thai-Boxing. He was a successful competitor in different weight categories. Numerous trips to Asia, the USA, and other European countries gave him the opportunity to study under competent and well known instructors. Sensei Pinders has dedicated himself to the in-depth study of Martial Arts which includes elements of a non-physical level. He has developed self-defense concepts for several institutions, which has been applied successfully.