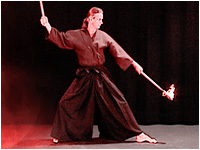 Tonfa - the use of this traditional weapon has prevailed in modern times. In it´s modern form (e.g. Madanok) it is used today by the American police forces or the German SEK (similar to SWAT).

Weapons training enables the practitioners even today to use the different objects efficiently and to defend themselves with objects of daily life. 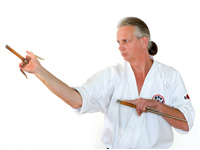