Boxing is one of the oldest Olympic disciplines and provides a significant fitness program, being both integral and versatile alike. Boxing exercises improve basics like strength, stamina, speed, flexibility, and coordination. Stress is reduced and the ability to concentrate is improved. The training involves all-round programs which increase and preserve students’ power and health. It is suitable for men and women alike. The aim of the competition is to defeat the opponent with technical means which are trained persistently, precisely and powerfully. Competitors fight in official weight categories according to the rules of the German Boxing Federation.

First forms of fist fights probably took place in Egypt around 2000 B.C. In the following 2000 years this first form of boxing spread out over and around the Aegean Sea. In 688 B.C. the first official match took place in the context of the Olympic Games. In ancient Rome “boxing” matches were performed with leather straps and metal thorns (which were attached to the fists) by gladiators. There is evidence that fist fights were also part of other cultures. Modern boxing originated in 18th century England, with its first rules set up by the master fencer James Figg. In 1867 the London Prize Rules of Marques of Queensberry were modified with the result being that the first boxing gloves were used. On 7th September, 1882, John I. Sullivan became the first official boxing world champion according to the rules of Marques of Queensberry. 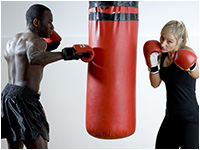 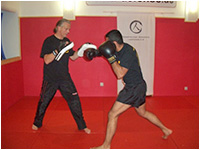 Today, boxing is a modern and popular sport practiced all over the world. Its effective training results in an excellent fitness level and is suitable for all ages. For a long time now, women have also been practicing boxing and are powerful competitors. Those who learn about the art of “fist-fencing” will be fascinated.

Boxing techniques are also trained in the context of self-defense. A constant repetition of techniques in sparring optimizes their effectiveness which lies in their simplicity.

I-defense Essen e.V. is a member of the German Boxing Federation, the European EABA and the worldwide AIBA.